COOPERATION BY REMOTE LABORATORIES IS DISCUSSED AT BTH 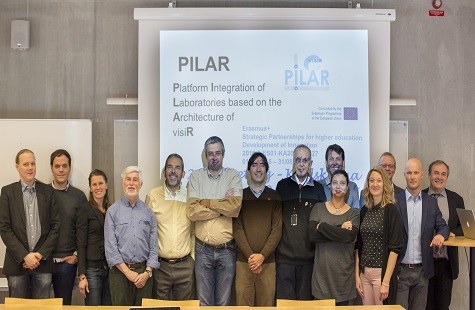 On May 9 – 10, the partners from the PILAR project (Platform Integration of Laboratories based on the Architecture of VISIR) met at Campus Gräsvik. In addition to BTH, representatives from four other European higher education institutions participated.

At the end of 2006, BTH launched Virtual Instruments Systems in Reality, VISIR, which is an Internet based  laboratory network for remote testing and control of electronic circuits. The network is designed to facilitate the distance learning at a global level. Several universities have already implemented VISIR, but there is a need for further educational developments and enhancement of the Internet of Things, IoT, based laboratory network which are the objectives of the PILAR project.
Among other things, all VISIR systems are planned to be linked to establish a network laboratory and through modern Internet of Things technology, cooperation between higher education institutions should be greatly facilitated.

This three-year project, which is in the field of applied signal processing, will continue until the autumn of 2019.

Here you can read more about the PILAR project.