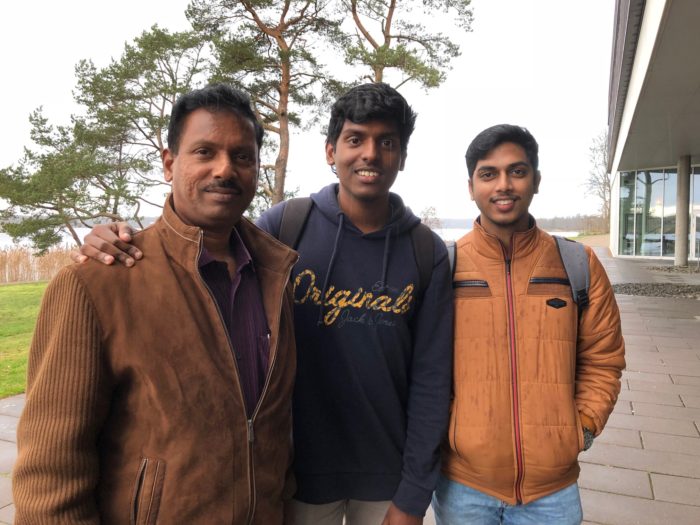 The Indian students Venkata Sai and Chandrasekhar is a part of the brand new 3+1 programme at BTH. They arrived in Sweden during late summer to complete their studies in mechanical engineering at BTH. After graduation, they would like to work within the European motor industry. The demand for engineers in both Europe and Sweden is very high and the future for young engineers is bright.

Chandrasekhar Gollapalli och Venkata Sai Akula came to Sweden in August. Chandrasekhar, who has a multicultural background growing up in the desert state of Qatar, is jokingly saying that he would like to experience proper cold. ”I would like to see the winter” he says.

The students have only been in Sweden for a couple of months but they are already experiencing the differences compared to studying at home. In India the studies are theory focused while studies in Sweden are more applied.

Mallikharjuna Rao Gollapalli is visiting his son Chandrasekhar in Sweden. He is himself an engineer and has worked for 19 years in Qatar. He nods:

– 90 percent of what is learned in India is theory. The application comes afterwards. Here, everything is practice. And that is exactly what is demanded in real life, he says.

The youths are a part of a brand-new programme called 3+1. It means that three years are completed in India, after which one year is studied in Sweden. After this you get Bachelor’s degree in both India and Sweden. After graduation, it’s possible to either start working, or continuing another two years and get a Master’s degree.

The labour market for young engineers is bright both in Sweden and Europe. Venkata Sai Akula would like to get an employment within Swedish motor industry. He would prefer Volvo, despite that the motor industry in India is enormous. So are, however, the challenges. The car industry all over the world is facing a vast transformation.

– Of course we are thinking of climate changes, Venkata Sai says. – But here the research has come so much further than in India.

Chandrasekhar would like to find a way to work in Europe, but both students envision how they in the future will bring their knowledge back to India.

However, right now there are more pressing every day issues to handle. Venkata Sai och Chandrasekhar are at the moment living together, in an old prison converted to student accomodation. They are seeking high and low to find another place to stay, which is quite difficult in a small city like Karlskrona.

– We are desperately trying to break out of prison, Chandrasekhar says jokingly, and all three men laugh heartily.

It won’t be a problem, we are sure.