Praised for his sustainability work 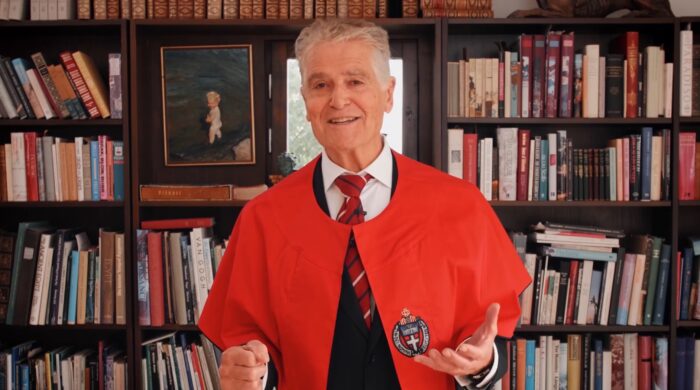 BTH professor Karl-Henrik Robèrt receives an honorary doctorate from Radboud University in the Netherlands for his work on strategic sustainable development.

The University of Radboud recently celebrated its 97th birthday with an academic celebration at Stevenskerk in Nijmegen. At the ceremony, BTH professor Karl-Henrik Robèrt was given an honorary doctor at the university.

Karl-Henrik Robèrt is praised for his work, which has been fruitful for the development of the sustainability agenda at Radboud University. A current example is how science can help organizations relate strategically to the UN’s 17 sustainability goals.

The Rector Magnificus of Radboud University, Han van Krieken, gives the following motivation for the appointment of Robèrt:

– It is for a variety of reasons that Radboud University wants to honour professor Karl-Henrik Robèrt. Our university’s new Strategic Plan defines explicitly our “responsibility for the world in which we live.” It states as one of our goals that “we want to be in the vanguard when it comes to achieving the United Nations’ sustainable development goals and to make our own contribution to the changes needed in the world in the coming decades.” Professor Robèrt can show us ways in which we can translate these goals more effectively

– BTH has a long history of collaboration with colleagues from Radboud University. This applies not least to cross-sectoral sustainable development within municipalities, for example sustainable urban planning for Eindhoven or the development of resilience to future climate change in the municipalities along the Rhine Delta.

– Radboud University is developing new strategies for R&D and pedagogy in the field of sustainability, and now wants to further deepen the collaboration with us at BTH. It feels both honoring and encouraging to receive their honorary doctorate in this situation, says Karl-Henrik Robèrt.

The film from the appointment with motivation and Karl-Henrik’s speech of thanks.

Karl-Henrik Robèrt is also one of the founders of BTH’s unique Master’s programme in strategic leadership for sustainability. Read more about the programme.