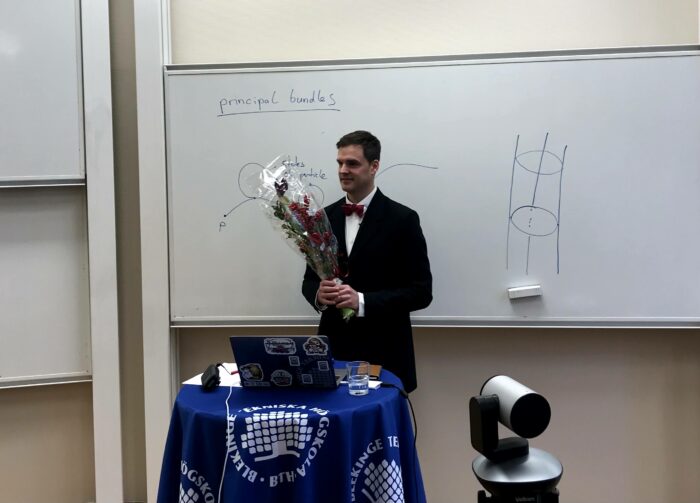 In this lecture I will illustrate the idea behind noncommutative geometry, a whole new branch of mathematics which has flourished in recent years, both in analytic and algebraic styles, with the aim of completing the geometrization of mathematics. It also attempts to give a quantum counterpart to classical geometries, something of extreme interest in theoretical physics.

More precisely, I will first discuss the relationship between geometric spaces, such as the real line or the unit circle in the plane, and their associated (commutative) algebras of functions. In particular, I will mention what this has to do with classical Fourier transform. Then I will provide mathematical meaning to the expression “quantum (geometric) space”, which is at the very heart of noncommutative geometry, and show how quantum spaces may be utilized to describe the geometry of space-time in a very economical way.

I got my diploma in mathematics (with minor subject theoretical physics) at Technical University of Darmstadt in 2007 and I received my PhD in mathematics (Dr. rer. nat.) at Friedrich-Alexander University Erlangen-Nürnberg in 2011. After this, I performed research projects and gave University lecture courses in four different European countries, namely Denmark (University of Copenhagen), Finland (University of Helsinki), Germany (WWU Münster and University of Hamburg), and Sweden (Blekinge Institute of Technology and Linnaeus University). Since June of 2019 I work as senior lecturer at the Department of Mathematics and Natural Sciences of Blekinge Institute of Technology. My main theme of research revolves around the noncommutative geometry of so-called principal fiber bundles, which are becoming increasingly prevalent in various applications of geometry and mathematical physics.